The site is secure.
The https:// ensures that you are connecting to the official website and that any information you provide is encrypted and transmitted securely.

What is census block group that is designated as an environmental justice focus population?

The definition of an environmental justice focus population is defined as any census block group in which:

(B) Persons of Color and Indigenous Peoples comprise at least six percent or more of the population; or

(C) at least one percent or more of households have limited English proficiency.

Census block groups are groups of neighborhoods as mapped by the US Census Bureau. Data from the Census and/or the American Community Survey can used to determine the demographics of residents in those neighborhoods. Here is a map that shows the different areas in Vermont that fit this definition: 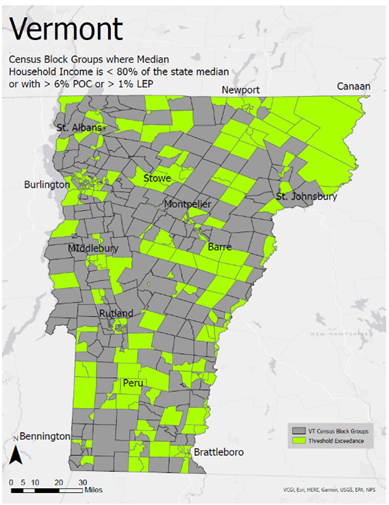 Please feel free to reach out to ckennedy@leg.state.vt.us if you have any questions.